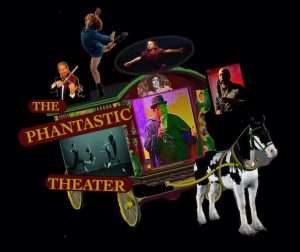 THE PHANTASTIC THEATER – New Music and Art for All Ages!

Springing from the traditions of the fine arts, ‘The Phantastic Theater’ presentations introduce young people to the transformative power of imagination though engaging and educational interdisciplinary works and remind adults of the time when they first experienced the arts.

MISSION: This unique presentation system combines fine arts education with live performance, workshops and individual presentation. We provide the opportunities for fine arts educators and performers to share with young people and their families the impact the arts have had on their lives, individuals and society.  Teaching elements are firmly embedded in our presentations, both specifically and intrinsically. We are reach out to diverse audiences and under-served communities. 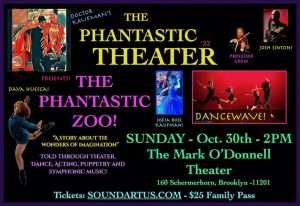 “Studies in presenting new music and art to people of all ages all at once.” 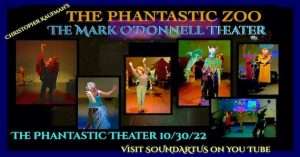 See/hear Josh Sinton perform/improvise to Kaufman’s film:
‘A Story of a Tardigrade’
See/hear Paul Groh perform music based on Nature
“When Turtles Fly!” 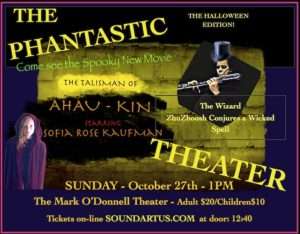 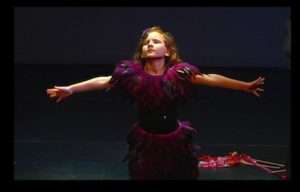 The Phantastic Theater events begin with a production of one of Doctor Kaufman’s music plays.

In these works, brilliant phantastical stories infused with educational elements are told via a full range of media combined into one experience.  Symphonic music pours through speakers as colorful illustrative art streams on screen.  Puppetry, live performance by world class musicians, voice acting and dance work together to deliver Doctor Kaufman’s unique mission to share the power of imagination as realized in the fine arts.  They are also enthralling and fun.  Doctor Kaufman thinks of these works as ‘music delivery devices’.

Past productions include:
THE MUSICAL FOREST: This work teaches music fundamentals in the context of imaginative fantasy.  Squiggle T. Buglet adventures through The Musical Forest learning music words and earning ‘seed pods’ for music fundamentals.  She takes these pods to ‘The Mysterious Cave of Doctor Soundartus’ and makes music on his magic music wall.  This piece has been performed by Doctor Kaufman and his daughter, Sofia Rose Kaufman, on many occasions from workshops, chamber settings and with full orchestra. More HERE:

THE PHANTASTIC ZOO – was originally conceived as a vehicle for Phantastic Theater regular, world renowned flutist/composer Robert Dick who performs virtuosic music throughout as he personifies many characters of the story.  You are hearing incidental music from this piece now.

Mary and Tim are on a field trip to the zoo, they see exhibits of elephants and exotic birds.  Here Doctor Kaufman’s score uses natural sounds of these creatures mixed with brass and woodwind music.  Later they meet the 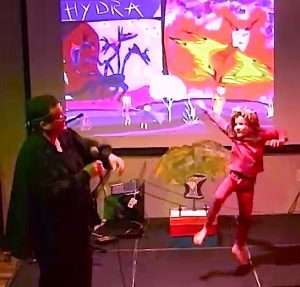 Wizard, who ushers them into The Phantastic Zoo.  There they hear the nourishing stories of fantastic creatures: The Phoenix, The Mermaid and The Dragon.  From each they learn secrets about living a life of imagination. More HERE:

DANCING NIGHT HAWK – inspired by Native American Mythology, this work could be best characterized as a cinematic ballet.  The lead is performed by Sofia Rose Kaufman and the work highlights her talents as dancer and actress.  In the story, Night Hawk saves the Ne’ne’m

e’kay’aa (the Thunderbirds who have protected her village for a thousand years) from the evil Ma’ha’kuk Demon Lords who have captured them.  At the end Hawk is crowned medicine princess of her village.
More HERE:

THE TALISMAN OF AHAU-KIN – premiered on the first Halloween Edition 1027/’19, this work is a movie.  Sofia is filmed in green-screen and placed into Doctor Kaufman’s imaginative illustrative world. Doctor Kaufman’s brilliant film score is a primary element.   In the story, young Rosita Alvarado saves the world from the ravages of Climate Change, which takes the form of an evil mist turning people into zombies and ghosts.  She braves a haunted house and a pirate ship at the bottom of the sea.  Doctor Kaufman terms these works, ‘Halloween Parables’ and each Halloween Edition will begin with a new interesting take on Halloween-based themes.

Most of these works are full featured Books with Free full Audio Albums on sale HERE:   (all proceeds go to The Phantastic Theater Productions)

After the opening Music Play, the featured Guest Teaching Artist takes the stage. 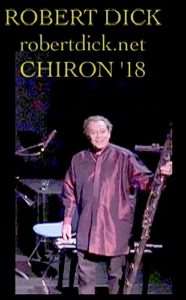 Core member (flutist/composer/inventor) Robert Dick is featured throughout. As a world renowned artist he commands great interest in his performances.  He has been GTA as well as participating in music plays and music pieces.

At our most recent event 10/27/19, the premiere of our now annual Halloween Edition (presented the Sunday before Halloween), we were honored to have as GTA, Karl Kramer.  Karl is an internationally known french horn player, teacher and composer.  He spoke about when he was young and started playing horn.  He played famous h 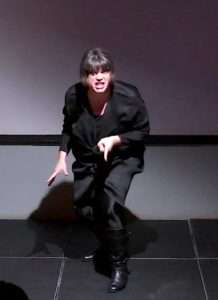 orn solos from classical works (in historic chronology) which inspired him along his path.  He ended with an original composition which had an engaging story to it and plenty of humor, while exposing the audience to modern horn playing techniques.

The previous two years featured, as GTA, Jennifer Roderer (courtesy of the Metropolitan Opera).  Jennifer spoke about how when she was young, she found she had an amazing vocal gift and that she loved the witch characters from operas.  She then performed the witch scene from Humperdinck’s Hansel and Gretel, giving the audience quite a thrill! She also performed Arias from famous operas with Daniel Rieppel (below).

Another featured GTA was Daniel Rieppel.  Daniel is a concert pianist and performed the music of Debussy.  Before performing, he spoke engagingly about the music and gave them many things to listen for. His pyrotechnic musical talents are an ongoing featured element of Phantastic Theater productions.

After the Guest Artist spot we feature a young artist.

In this theatrical piece, the Wizard conjures a mighty spell.  The realization of this spell is our unique ‘macabre’ adaption of Donald Erb’s work ‘Souvenir’.   All the artists of the day join in the performance which culminates in a state of ‘Joyful Pandemonium’.  Erb’s classic electronic music plays on tape as musicians improvise with it, black lights break out and we toss glowing beach balls for the audience to play with and glowing toys for the young people to take home.  They leave with Souvenirs, toys and imaginations filled with Art and Music!

Other Guests have included; Member of the Jane Goodall Youth Council – Arunima Roy,

Next season, for THE PHANTASTIC THEATER: Halloween!, Doctor Kaufman will create THE WITCH – a story about a young girl who ventures to the witch’s house for a cure. The witch is terrifying, but later removes her mask to reveal a beautiful woman of nature.

Note: The Phantastic Theater is my daytime series for full family audiences. My evening series for the presentation of ‘heavier’ works, still involving creative presentation, is titled CHIRON Performing Arts, and can be found HERE:

As founder/director of these series I have presented the work of hundreds of artists of all disciplines.

Within a setting of theatrical presentation, gorgeous symphonic music flows through speakers as the audience sees text and colorful illustration flow by on screen, like a living book. Experience dance, voice acting, puppetry and narration!  Join Mary and Tim as they start their adventure on a field trip to the zoo and meet the Wizard Zitthoona who ushers them into THE PHANTASTIC ZOO where they hear the timeless and beautiful stories of The Phoenix, The Mermaid and The Dragon! A unique and powerful storytelling experience for the whole family!

Featured on this event was a full production of THE PHANTASTIC ZOO.This work takes the audience on a thrilling adventure and teaches the power and importance of Imagination.  Cinematic music pours through speakers and scenery is streamed on screen as live players and actors and performers participate in various production variations.  Doctor Kaufman created large puppets as well for the mythic characters.

Dr. Kaufman is an accomplished composer who has created a large catalog of vibrant, colorful and expressive works for classical concert stage – and he has focused on the teaching of young people for many years.  More information on his work HERE:  his teaching HERE:

‘The Phantastic Zoo’ was originally conceived with participation of a past friend, Robert Dick.  His

personified various characters and played on the world-premiere. I thank him for this help in getting the project started.  New productions are under way!

Brochure for THE PHANTASTIC THEATER

DONATE TO THE PHANTASTIC THEATER!

3 thoughts on “THE PHANTASTIC THEATER”

SCENES FROM THE PHANTASTIC ZOO