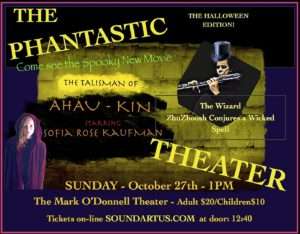 We began with an original new movie made for our Halloween Premiere.

In response to mistreatment of our planet, the Earth has created an evil mist

which turns people into witches and zombies. Young Rosita Alvarado must go to the ancestral home, ‘Blood Mansion’, of her ancestor, the dread pirate Captain Blood – who

pirated the seas during the time of the Spanish Conquistadors.  She must retrieve the “Talisman of Ahau-Kin” which was stolen from the tombs of Mayan Kings and save the world! To do so she must brave many dangers and visit her ancestor’s ghost at the bottom of the sea in a sunken pirate ship!

‘The Talisman of Ahau-Kin” is filled with Doctor Kaufman’s brilliant music – horror film style!  Young actor Sofia Rose Kaufman is filmed in green screen and placed inside of Doctor Kaufman’s illustrative art to tell a brilliant and SPOOKY story!

*The Talisman of Ahau-Kin was filmed, edited, and produced by Doctor Kaufman/The Phantastic Theater Productions.  Doctor Christopher Kaufman wrote the book, and created the art and musical score.  He also narrated and voiced the parts of Barnabus and Captain Blood.  Sofia Rose Kaufman starred as Rosita Alvarado, Maryclare Scerbo as Mary.  Talisman was premiered at the concert event described here, 10/27/19 at The Mark O’Donnell Theater.  It was included in the International Puerto Rican Film Festival 11/20 and is a semi-finalist for the Best Long Short feature with the Alternative Film Festival Spring Edition.  The film can be found on Doctor Kaufman’s YouTube channel, SOUNDARTUS.

and enjoin the arts, Guest Teaching Artist Karl Kramer (award winning french hornist and composer) addressed the audience.  He talked about what inspired him to become a musician when he was young, performed excerpts based on those early experiences and finished with an original work of his own composition. 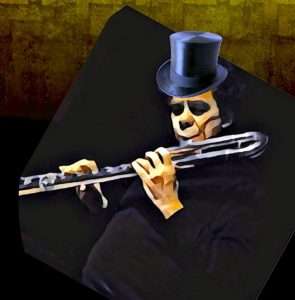 “The Wizard Zhuzhoosh! and his Magic Flutes!”

The Wizard Zhuzhoosh! conjures a spell… bats, spiders and other Halloween creatures appear… glowing in black lights and the theatrical setting provided by The Mark O’Donnell Theater… the ultimate ‘spell’ takes the form of a fun multimedia festive audience-friendly experience with Halloween ‘souvenirs’ tossed to the audience which they took home… Boo hoo ha….

And all being performed by advanced teaching artists.

This last piece (the spell of ZhuZHoosh) is actually a work titled ‘Souvenir’ by the great American composer Donald Erb. We created a ‘macabre’ version of it. We will repeat it each year with variations.  TO learn more about Don go HERE to see a short memorial film I created for him. 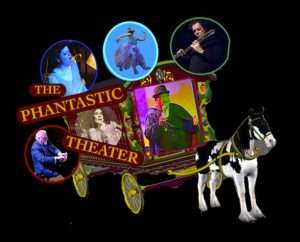 CHIRON must take this all over the world! It is so positive about our planet and about being a human being… CHIRON shows how amazing we can be with all that talent on stage!  You are doing it!  Making a difference using your skills, family, music, art and more… lots   of positive powerful talent!   – Alice Cotton – Teaching Artist

After concert audience members:
“Wow! What a fascinating program!”

“Thank you so much for having me. I really enjoyed the performances. I was so impressed with Sofia Rose’s performance. I don’t know how she remembered it all!