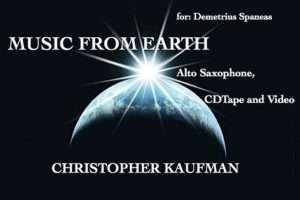 About MUSIC FROM EARTH the composer writes:

…”Music From Earth represents a new evolution in my work in terms of how music is put together and presented. I came to computers recently and now am enjoying working with film artists and for those projects modern technology is paramount. It was with great pleasure that I discovered the possibilities for the combination of live and electronic music. I use my western orchestral sounds and electronic instruments in original ways born of my long experience with live music and orchestral composition. Add to these the eastern orchestra, electronic instruments and natural sounds and you have a very fulfilling orchestral ‘universe’.

…The resultant sound world and presentation is unique and versatile, infinitely diverse and able to monumentalize inspiration and compositional planning. MUSIC FROM EARTH is often presented with lighting and visual projections of natural images – which can seem as abstract images, sometimes of recognizable creatures or forms…”

MUSIC FROM EARTH was composed during the last two weeks of August, 2007 for Saxophonist and New Music Champion Demetrius Spaneas. It is part of a series of works inspired by Environmental Awareness, the leadership of Al Gore and others, my own sense of these issues and my love of the sounds involved. Demetrius has premiered the work in Tashkent, Uzbekistan (11/08) and performed it at the DOM Cultural Center in Moscow. He continued to tour the work with a number of other pieces of American music (including his own) in locations such as Kyrgyzstan, the Ukraine, Bulgaria, St. Petersburg and Riga, Latvia. Now we will perform it in America. When possible the performances include a film of natural imagery. This film, which I created, uses microscopic images and images of familiar forms close up so as to appear abstract as well as recognizable natural images such as creatures and geographical forms. 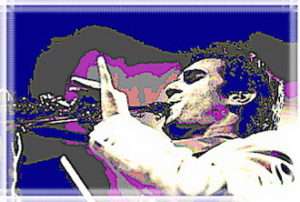 “…such zest, such fire, such a gleeful explosivenesss… had it been just one percent more intense, it would have necessitated scraping the audience off the walls.” – BOSTON GLOBE

A SONG OF THE EARTH

Christopher Kaufman’s MUSIC FROM EARTH tells a story – the projected imagery and the aural backdrop provided by the taped music which accompanies the soloist, bring the audience along a clear path.

The story begins in the center of the ocean – the mid-Atlantic rift. The video shows images of deep ocean volcanic vents, lava and expressive ocean waves. The titles have double meanings and this one refers to the ‘rift’ between humanity and nature.

A powerful rhythmic backdrop ensues – Images of microscopic life move to formations of coral and undersea creatures such as jellyfish, dolphins and whales as the story progresses to the surface of the sea. Whalesong is part of the taped music. It ends with music which sounds like the ‘Earth breathing’.

Images and sounds from the Earth’s surface. You hear music composed from the sounds of tree crickets, woodpeckers, polyphonic owls, a june-bug flying into a microphone, orchestral sounds, and beautiful melodic work for the Sax.

Here the screen goes black and we listen. The music here is based on a piano improvisation which Kaufman orchestrated and developed. Rattlesnake sounds of are part of the music. Slowly images return – showing the galaxy and moving gradually to Earth. The music grows to a seven part rhythmic layering featuring Eastern percussion. The sax plays evocative solos which grow to a fevered pitch. There is a spiritual quality to the music.

Images of storms are matched in the music as the Sax performs harmonic riffs depicting lightning strokes. Live ‘cuica’ and thunder and wind sounds are interwoven with a texture of powerful and complex rhythmic music. Whalesong returns in an atmosphere of forboding and warning…