Christopher Kaufman’s Hudson Valley Music is a work for the concert stage –  featuring live music performance,  hundreds of natural and orchestral sounds and a film created from natural images and the art of Ken-Cro-Ken and Alice Cotton. HVM engages the audience in an immersive journey from the Long Island Sound, up the Hudson River Valley and into mythological space. Kaufman redesigns the work for any ensemble or soloist.

“…For this project I have assembled hundreds of natural sounds. With these I have worked extensively – creating interwoven backdrops of sound over which the musicians perform. I have also created original instruments from the sounds of living creatures… I perform music onto the tape… and compose with orchestral sounds to create powerful rhythmic ostinatos in the central portion of the piece and peaceful textures at the end. Throughout the work musical themes are shared by the sound design, the animals and the live players…

To date I have designed and performed this work for ww quintet – Quintet of the Americas , 2 quartets – Society for New Music – (vln,clar,vc and pno) and (fl,cl,vln, vc), sextet – Ensemble Pi – (fl, vln, clar, vc, hn and pno), solo versions for horn, oboe, tuba (David Unland) and flute (Robert Dick) and also a version for full chamber orchestra (Cayuga Chamber Orchestra). Each soloist or ensemble performs by itself with a Performance DVD with the images and sounds. NOTE:  As result of a successful indiegogo campaign, I can provide full tech as long as location is within driving distance – traveling kit with Bose sound trees and projection, can set up in a few minutes.

HVM and Quintet of the Americas – The Mannahatta Project 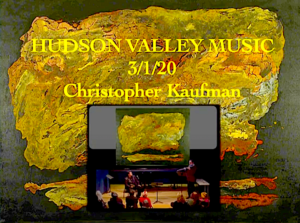 Think of SCORES as repositories for parts.  Coordination with the tape is musical and natural.  With a leader and timer versions have been successfully accomplished in few rehearsals.

‘OCEAN’ – The story of Hudson Valley Quintet begins in the ocean at the mouth of the river – the audience hears ocean surf, whalesong and beautiful melody from the players. The sounds of canoe oars paddling is a part of the music and enhances the feeling of being inside the experience. The sounds of Beluga recorded underwater are composed into an eerie soundscape

as the surf and whalesong gradually change sides, giving the impression of turning towards the shore.
The music flows to the shoreline – you hear shorebirds and water sounds shift from ocean to river water. A ‘symphony ‘NOCTURNAL‘ – Here a tapestry of sound is woven

from the cries of extinct species. The idea of this movement is to create a feeling of fear and immediacy – a touch of the flight or fight reflex – to bring the issue of climate change to the foreground of the listeners’ mind.
The last movement is titled ‘…AND THE EARTH IS OUR SPIRITUAL HOUSE…’. This movement is beautiful and peaceful yet still retains the passionate intensity of the preceding music. Kaufman did not wish to tie in to a specific religion, but rather the ‘spiritual awe’ John Muir might have felt when in nature. The principal animal characters return in a new chorus composed of their sounds.

ANOTHER of my works of this kind is MUSIC FROM EARTH – for Alto Sax, CDTape of Natural and Orchestral Sounds and Video: Visit this link for much more:

Kaufman was selected to participate in one of four COMPOSER SHOWCASE Events with the Cayuga Chamber Orchestra
November 9th, 2013. 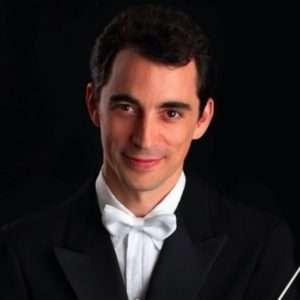 Hudson Valley Music with Quintet of the Americas

“Ingenious interaction of the quartet and the natural sounds… and in the structural premise of the music, not just as sound effects.” – well-known and highly regarded composer Andrew Rudin

RESPONSES AND COMMENTS to ENVIRONMENTAL WORKS:

NOCTURNAL SPIRIT:
“All I can say is WOW! The natural sounds and the musicians intertwine together perfectly to create something original and powerful. The musicians are quite amazing as is the composer! Bravo all!” – Alice Cotton (viewing)

“Kaufman knows how to combine sounds and visuals to make a convincing mix. HUDSON VALLEY MUSIC appealed to sophisticated and unsophisticated audiences alike.” – Barbara Oldham, director of Quintet for the Americas

“‘OCEAN NOCTURNE’ for wind quintet fulfilled our request perfectly. The music beautifully compliments the very moving and timely DVD – about nature, the environment and our deep relationship to our surroundings.

The performance was very much enjoyed by the performers and the audience alike. We wish to thoroughly recommend this excellent piece to professional ensembles and their audiences.” – Catherine Pluygers, Founder/Leader of the New London Wind Festival

One of my all time faves:

“You are the 21st Century Nostradamus!” Captain of the Salvation Army in Queens, NY.