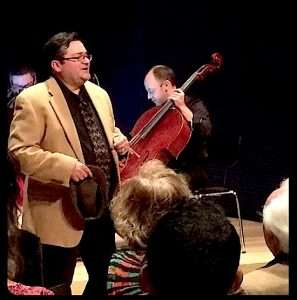 October 30th, 2022: Performance of orchestra piece – SPIRIT – with the Southwest Minnesota Symphony. We are planning a performance for next season of my orchestral tone poem with narration – ICELAND.

Same Day: at the Mark O’Donnell Theater: performance of the new version of my ‘classical music play’ – The Phantastic Zoo — with dancer, Dava Huesca. Please subscribe to my YouTube channel once there.

With the New York Composer’s Circle I had a performance last year of my piano clarinet piece, Nocturnal Phantasy, Here: (brilliant father/son duo) – this spring NYCC have scheduled my violin duo, Mercury’s Shadow: and – Signs of Heaven (poems of Emily Dickenson).

Last October I premiered my new String Quartet – ‘The Freedom” – dedicated to my mother, actress Anna Filameno and concerning the election of 2016: Here: [amazing performance at link)

Last week visited with my friends – Quintet of the Americas.  I wrote up a review of the concert; HERE.

In 2021 I decided it was time to finish the first series in my work of fantasy, Tales Of The Ocean City – so I wrote three books in one year – books 3,4,5 — and completed the opening series…recently, I published book 6 and am working on book 7. Webpage :HERE:

For many activities go to CHIRON PERFORMING ARTS and THE PHANTASTIC THEATER.  Visit my YOUTUBE CHANNEL – SOUNDARTUS

HIGHLIGHTS THROUGH THE AGES

Promoted to level of Artist Producer in the Manhattan Producer’s Alliance Organization!

The Manhattan Producers Alliance is a media education, professional mentoring and networking community comprised of Oscar, Grammy, Tony and Emmy award-winning musicians. We are dedicated to advancing the art of music composition, performance and recording. With the help and support of our members, we create unique professional development trainings for the music industry, as well as educational music/music technology initiatives for kids K-12. 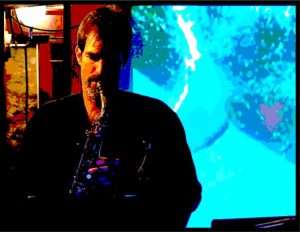 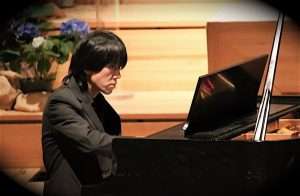 Performed my IN MEMORIAM:WENDY MARANISS for solo piano (here) on the ‘Social Networking Concert Event’ founded by the late Douglas Townsend – and now kept going by his wife Jean. The concert was:
– April 23rd, 2013 at Saint Peter’s Church –
and will be up on You Tube soon. 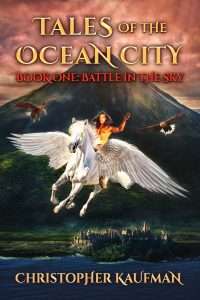 ‘Tales Of The Ocean City’
Kaufman is presently creating new chapters in his prodigious Epic Fantasy Series for multimedia Ebook – ‘Tales Of The Ocean City‘.
TOC is available:  HERE:
Kaufman was writing stories since he was five years old and is enjoying this method of storytelling which puts together thrilling adventure story, dramatic narration and continuous cinematographic music – where the music is an equal partner and participates in the syntax of the writing. The work is presented in ‘episodic form’.
At present Kaufman has about two hours of vivid and exciting material. By the end of 2013 the ‘overall first volume’ of ‘Tales Of The Ocean City’ will be complete – and over six hours in length. Kaufman is using the internet social streams, app process, radio and, later, live performances to move this project forward.

Kaufman enjoyed speaking about his work at Queens College (9/27/11) at a composers seminar held under the auspices of Professor Hubert Howe.

Kaufman spoke about his environmental pieces and played a few small films to the delight of the participants. 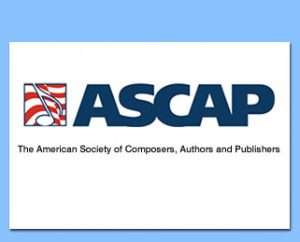 This award recognizes composers whose performances are primarily in venues not surveyed by ASCAP; and/or writer members whose catalogs have prestige value for which they would not otherwise be compensated.
This award is a wonderful opportunity for those of us who work in contemporary music genres that have many of our performances in alternative spaces, and countries that are not surveyed by ASCAP or may not follow international copyright law.

Kaufman is most grateful to receive this honor and thanks ASCAP and the Concert Division Board for recognizing his work. 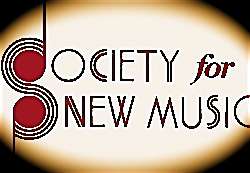 Read Melinda Johnson’s Article about this performance in the Syracuse Post-Standard :HERE:

In advance of the performance Kaufman participated on 2 radio shows: WKCR Columbia University Radio on March 15 (89.9 FM) and March 14th WBAI (99.5 FM) – about HVM and other topics.

Summer of 2012 Kaufman completed a work for Violin and Piano titled OCEAN in which he applies ideas from HVM into a traditional chamber music context – turning, for example, whale-song into themes and motives. Like HVM the music of OCEAN expresses the beauty of and identification with nature and ‘Outrage’ – here in the movement ‘Oil in the Water’.  PROJECT PAGE :HERE:

Here is a shot from the final performance of the opening tour of ‘Hudson Valley Music’ with Quintet of the Americas – at NYU’s Frederick Loewe Theater: in the 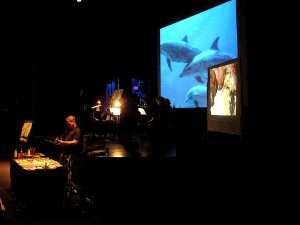 foreground you see artist Ken-Cro-Ken enacting a live painting as part of the performance:

HVM was Commissioned by Barbara Oldham

and Premiered by  Quintet of the Americas

Christopher Kaufman’s HUDSON VALLEY MUSIC features a CDTape composed of hundreds of natural sounds from the Hudson Valley Environment and compelling visuals comprised of natural imagery and the art of Ken-Cro-Ken and Alice Cotton.

The initial season was presented in concert with the Wildlife Conservation Society’s ‘Mannahatta Project‘.

..Dr. Eric Sanderson spoke after some of the performances. 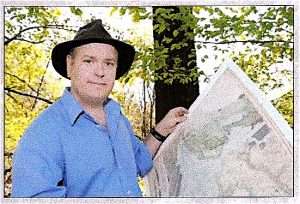 HUDSON VALLEY MUSIC celebrates the beauty and nature of the Hudson Valley as well as delivering a message concerning environmental preservation. PRESS for more information.

• LITTLE COURAGE (Independent Film) – screened at the The New York International Latino Film festival: Now being screened at similar events around the country.

• LITTLE COURAGE was also recently screened at the Lower East Side Arts Festival.

Bombastiq Brass performed my ‘Theme and Variations on a Tune by T.’Fats’ Waller’ – from BRASS QUINTET – :HERE: 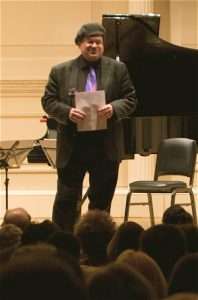 On 1/31/09 I delivered a speech representing OBAMA Music, Arts and Entertainment. The brilliant New York Empire Trio, of the Bulgarian Virtuosi, performed. Their concert included a work by Bulgarian composer Roumi Petrova which I also introduced. I spoke about ObamaMae, the founder Marla Turner, of my experiences with ObamaMae and the participation of myself and other artists in Barack Obama’s successful Presidential Campaign. 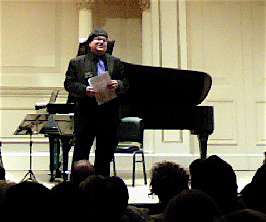 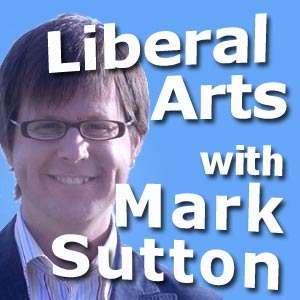 “Mark Sutton is the host and producer of Liberal Arts, the radio show that explores the arts from an unapologetically political perspective.”

I was interviewed by Mark Sutton on his show the week of October 20, 2008. Feel free to visit the link and listen to the interview – you also hear the full interview above – which includes my setting of Barack Obama’s North Carolina Victory Speech and our discussion of political action. You can also hear the featured work CALL FOR CHANGE – Victory N.C. on the music player above. Also you can listen to Mark’s interview (on his site) with Marla Turner who founded the site Obama Music Arts and Entertainment where I was FEATURED ARTIST OF THE MONTH (August):: and where you can find my member page and download politically inspired music. All thanks to Mark and Marla! – two very impressive individuals. 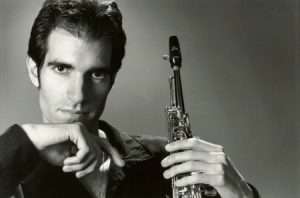 MUSIC FROM EARTH: – for Alto Saxophone Soloist and Tape of Western/Eastern Orchestra, Electronic and Natural Sounds::

MUSIC FROM EARTH was composed during the last two weeks of August, 2007 for Saxophonist and New Music Champion Demetrius Spaneas. It is part of a series of works inspired by Environmental Awareness, the leadership of Al Gore and others, my own sense of these issues and my love of the sounds involved. Demetrius has premiered the work in Tashkent, Uzbekistan (11/7/7) and performed it at the DOM Cultural Center in Moscow. He continued to tour the work with a number of other pieces of American music (including his own) in locations such as Kyrgyzstan, the Ukraine, Bulgaria, St. Petersburg and Riga, Latvia. Now we will perform it in America. When possible the performances include a film of natural imagery. This film, which I created, uses microscopic images and images of familiar forms close up so as to appear abstract as well as recognizable natural images such as creatures and geographical forms.

Various Credits:
Awards and Grants from Meet The Composer, MFJ, CAP and UCC Council on the Arts, Saltonstall Foundation, NYC Cultural Program • Fellow 5 times at the MacDowell ArtsColony • American Composers Orchestra Readings • previous board member of the ACA and Society for New Music • Individual Artists Award Ithaca New York • Reviewed for the New Music Connoisseur • Music has been featured at festivals and venues such as Eastman’s Musica Nova, The Internationales Musikinstatut in Darmstadt, Charles Ives Center for American Music, American Composer’s Alliance, June in Buffalo, Harvard University, the University of Puerto Rico in San Juan, The United Nations and Concerts in the Heights among many others • the SageFellowship (Cornell Univ.) • Kaufman is a friend of New York-based Duotone Studios.

> Kaufman’s work with young people and theater project — the musical opera ‘Pickles and the Junkman’s Daughter‘. Kaufman with writer/director Dominick Rossetti. Showcase performances at the United Nations as participants in the Tsunami Relief Benefit event and Katrina Relief events,

> Mercury’s Shadow – for two violins was performed brilliantly by Monica Bauchwitz and William Hakim.  Ms. Bauchwitz’ presented the work on her series ‘Concerts in the Heights’ — Friday, March 10th in NYC.

> Completed music for hour- long first act of musical/opera Pickles and the Junkman’s Daughterpwhich will be ready as a film in early to mid September.

> Presented – as conductor/composer/arranger of the Long Beach Chamber Symphony his works: ‘Voyage of the Dawn Treader’ for piano and orchestra, songs from ‘Pickles’ Angel Fish, Quiet Heart and One, Day One, Night – with JessAnn Smith singing. – with Susan James and the Long Beach Arts Council. Kaufman is now creating a new version of ‘Voyage’ for orchestra only.

> CHIRON Performing Arts -04 festival event his Madrigal in Spring was presented along with his new JAGUAR for poet and ensemble.

> Organist/ Composer Carson P. Cooman recently led a performance of Dialogue of Structures – for organ and trumpet at Harvard University.

> (11/9/03) presented CHIRON Performing Arts Event featuring his THE PHOENIX for ensemble and dance: which is dedicated to the City of New York, his …At the Gates… for 9 trombones and BRASS QUINTET – performed by Bombastiq Brass.

> His Madrigal in Spring – for piano trio was performed at the American Composers’ Alliance Festival June 2003. Composer on piano.

> Brass Quintet was performed by the Westwind Brass at the San Diego Museum of Art, May 2003 and Bombastiq Brass in June.

SOME HIGHLIGHTS FROM 1990’s

> CHIRON Festivals and Concerts :HERE: and :HERE: (scroll down)