Notes on the work and a conversation about my music:
Like many artistic works, my new quartet was born of tragedy, more than one in fact. The first was the presidential election of 2016. The second was the passing of my mother, Anna Filameno, who died weeks after the election as described further below. The two are inextricably bound, as my mother was, in addition to being an actor and screen writer, a political activist.  The finale is my emphatic rendition of The National Anthem. This music is imbued with feelings shared with those who have lost loved ones and those who are concerned as to the present condition of our politics.

Within weeks after the election my mother was in hospital stricken with cancer.  She died watching in horror as CNN displayed tragic imagery as to the present state of political affairs. Anna possessed and instilled in me a deep concern for politics. She wanted to see the first woman president and was, again, horrified at what occurred. All of this certainly adds to the intensity of emotion present in this music. I dedicate this music to her memory.

Although, the fall of 2016, my original conception was to compose a series of joyful dance movements, the events described above changed this entirely.  The first movement of my first string quartet is as intense as I could possibly make it.  It is filled with conflict and a powerful sense of hope.  It speaks for itself.  Below I mention that the language of this work references the lifetimes of the people I am writing about.  You should get a sense of that in the following.

The second movement, ‘Jitterbug/Lamentation’, begins with what I call the ‘jitterbug theme’. My mother was, in the day, jitterbug champion of New York City three years in a row! Dancing and dance themes infused her work and life. Lamentation begins with a viola solo, is taken up by the quartet and develops into a unified expression before the dance theme returns. You will also hear music inspired by the earlier times, a theme and variation on T.”Fats” Waller’s Ain’t Misbehavin’, which is a kind of theme song of mine, and a melody Anna would sing around the house in her theatrical and operatic voice.

There was another event, tragic in nature, which I needed to include in this music, i.e. the death of my former teacher, the great composer Karel Husa.  At first I created themes using the letters of his name, as I have been wont to do in the past on similar occasions, but that didn’t quite do it this time.  Additionally, there was a musical problem to solve… how to get from the language of the first movements to a place where a setting of the national anthem sounded like a natural progression.

The answer was simple. Karel Husa is famous for his work, ‘Music For Prague’, and in it he used the Czechoslovakian War Song, ‘Ye Who are Warriors of God’. Mr. Husa wrote this work in reaction to when the Russians took over his country and, (shh boom) I found that to be appropriate as well for our present situation. Also, the melody (of which I use only the opening characteristic phrase) is a perfect lead-in to our national anthem.  So, by using this tune from Mr. Husa’s work I honor my teacher, transition musically to the finale and provide political context.

There was still, however, the overall context in which to house this homage, and a rather esoteric notion came to mind. Movement three of my quartet is titled ‘Cosmic Node’ and is a depiction of a spiritual idea, that of the time between lifetimes. You will hear what sounds like radio waves and static from which emerge echoes of themes from the earlier movements, specifically the heart theme and the jitterbug theme, which here transforms and becomes gentle and calming before yet another element is introduced.

Once I was in this place, I imagined I heard from another spirit in the void. A few years 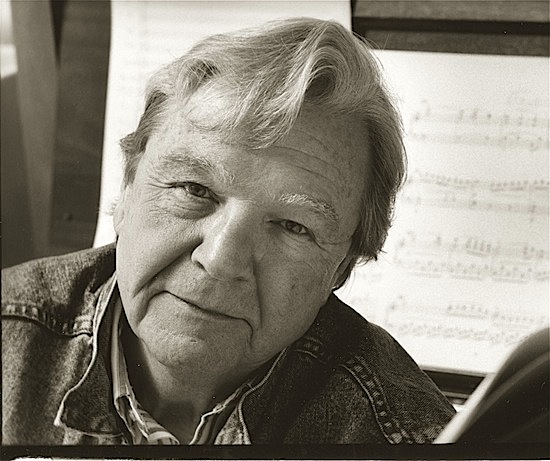 ago another of my chief mentors from the past died, composer Donald Erb. And so at this point in the quartet I included an homage to ‘The Big Dude’, Donald Erb. For this I created a variation on his theme from his Concerto for Brass, for which premier I was present in years past – an event I will never forget.  [note: a few years ago I created a short (7 minute) memorial film for Don which you can visit here: ErbMemorial.]

The finale is a wild and passionate rendition of our National Anthem.

This music celebrates many freedoms; emotional, American political and others, and also freedom from what may be considered ‘fashionable’ in today’s musico/political world. In this piece I evolved my musical language to express the intent of this work. I certainly think more about intent and motivation than ‘isms’.  Perhaps this expresses the influence of having an actress as a mother.  Anna had a great appreciation of the great character actors who express true ‘range’ in their art.  There is one ‘ism’, however,  I am willing to accept in reference to this work, i.e. ‘expressionism’… ‘American Expressionism’.

A conversation:
One more thing. I had a friend lend me his ears on this work… and he thought to hear a kind of battle between ‘atonality’ and ‘tonality’ and ‘tonality’ wins! I calmly bit my tongue and thanked him for his thoughts. I then told him that I thought his idea was a bit uninformed, certainly as to how I think about music, and I let him know I find the term ‘atonality’ ridiculous if not offensive. I informed him of my philosophy on the subject…

“The science is in! Humans experience color… psychologically, physically, emotionally… therefore all music is tonal… it is a merely matter of the range of a composer’s palette… and the techniques that get you there.”

And I pray one’s definition of musical color, i.e. tonality, is not limited to mere diatonic procedures…

Therefore ‘atonality’ is a ‘non-term’… I experience it as an insult… so please don’t use it in reference to my music!

Atonal and tonal are limiting terms, often used as political bludgeons.  I am happy to say that my personal musical range is rather extensive. I can write this new quartet, with all of its emotional and philosophical complexities, compose beautiful works for family audiences which they adore, create  ‘environmental works’ which combine sound sculptures created from natural sounds with live players and video… and have no problem with modern abstract forms.

This music is a complex of colors designed to express specific intents having to do with the subjects at hand. The language of the music reflects the lifetimes of the people I am writing about, who are of an earlier generation.  Again, in this music I celebrate freedom from limiting terms and, ironically, freedom from music politics.

I, of course, respect those who have evolved different artistic philosophies! …Beats being an arms salesman…

Such went our conversation! Thanks Joe!

Enjoy the music! My sincerest thanks to the brilliant musicians I am honored to deal with, without whom this work would be still wandering in the cosmic node.

Hello, old friend, I quite enjoyed your Freedom Quartet, which rather surprised me because I was afraid I wouldn’t. Last year the conductor of the chamber orchestra I play in….composed a string quartet in response to Trump’s ascendancy….I thought at the time it was a really bad idea… writing string quartets is probably the least effective for of political activism there is…But of course artists are obligated to write about what affects us emotionally. The FQ really resonated with me, because even here on the other side of the world people are distraught over what’s happening in America, and also because I too lost a parent in 2017. My father taught citizenship courses to immigrants and Boy Scouts, served on civil rights councils, et cetera, but he also believed that the secret ballot was a cornerstone of democracy. Not once did he ever tell me how he had voted in any election. But my brother tells me that in his final months he was very bitter and upset about Trump.
Dad never won any Jitterbug contests, though. That would have been hilarious.
I agree with you about the false tonality/atonality dichotomy. Hindemith noted that as all music is made up of tones, it cannot possibly be atonal. Unfortunately many of us have been taught to think of music in those terms. Music is made of tones, yes, but more importantly, it is made of feelings.