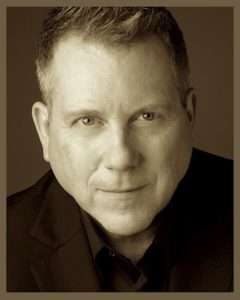 FOR VOICE AND PIANO QUARTET

Eugene O’Brien’s “Algebra of Night” will comprise the entire second half of the event and be preceded by a short interview with Mr. O’Brien.

The first half of this event will feature the music of CHIRON Performing Arts founder and director,  Christopher Kaufman.

Eugene O’Brien is the recipient of the Award in Music of the American Academy of Arts and Letters, the Rome Prize of the American Academy in Rome, as well as awards from bmi, ascap and The League of Composers / ISCM. He has received Guggenheim, Rockefeller, Fulbright, National Endowment for the Arts and other fellowships, and has been commissioned by the Fromm Foundation at Harvard, the Serge Koussevitzky Foundation in the Library of Congress, by the Meet-the-Composer / Lila Wallace Reader’s Digest Fund, and by many American, Asian and European performers and ensembles.
His music has been heard in concerts by the Cleveland Orchestra, the Italian Radio Orchestras of Rome and Turin, the Omaha Symphony, the Saint Louis Symphony Discovery series, the Louisville Orchestra New Dimensions series, and in numerous other orchestral and chamber concerts throughout this country and abroad. Recorded on the cri, Golden Crest, Crystal, Capstone, Gothic and Indiana University labels, his works are published by Codex Nuovo, G. Schirmer, and Boosey & Hawkes.
Mr. O’Brien studied composition with Robert Beadell, Bernd Alois Zimmermann, John Eaton, Iannis Xenakis and Donald Erb. A former member of the composition faculties at The Cleveland Institute of Music and the Catholic University of America in Washington, D.C., he is currently Professor Emeritus of Composition at the Indiana University Jacobs School of Music, where he has been a member of the faculty since 1987.

Read more about Mr. O’Brien and his work HERE: 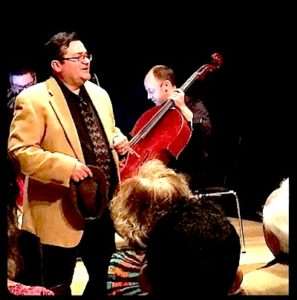 As director of CHIRON Performing Arts, Christopher Kaufman has presented the work of hundreds of artists of all disciplines. He is a composer of a wide variety of works, such as music for the classical concert stage and film, and environmental works which feature ‘music concrete’ compositions with hundreds of natural sounds mixed with live players and original videos. He also creates multimedia works for audiences of all ages which he presents on his series, The Phantastic Theater.
See his biographical brochure: HERE:

The First half of this concert will feature three of his works:

– for violin and piano 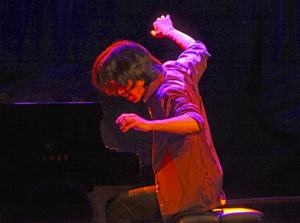 *Kaufman’s OCEAN was written in response to the BP Oil Disaster.    ** World Premiere 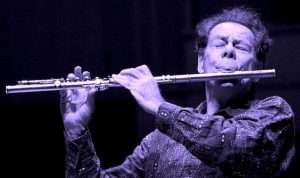 HUDSON VALLEY MUSIC – for Flute(s), Tape (filled with hundreds of natural and orchestral sounds) and video.
With the composer performing readings from Muir, Melville, Chief Seattle, Emerson, Blake and Whitman.

Hailed for her artistry and rich mezzo color, Clara Osowski shares her musicianship equally between the opera stage and recital hall. She has many opera credits, awards such as the winner of the Houston Saengerbund Competition (’17), and recognition for excellence in Minnesota as a recipient of the prestigious 2018-2019 McKnight Artist Fellowships for Musicians. [visit link below for much more].

In international competition with pianist Tyler Wottrich, in March of 2017, Clara became the first ever American prize winner when she placed second at Thomas Quasthoff’s International Das Lied Competition in Heidelberg, Germany. She recently won the Radio-Canada People’s Choice Award and third place in the song division at the 2018 Concours Musical International de Montréal.

Clara’s passion for contemporary music is exhibited in the song-cycles she has premiered by numerous composers with the Center for New Music at the University of Iowa, and her most recent collaborations with Linda Kachelmeier (Stars), Jeremy Walker (Alma Gentil), Linda Tutas Haugen (Gjendine’s Lullaby), Paul Rudoi (Midnight Songs) and James Kallembach (St. John Passion and Songs on Letters of John and Abigail Adams).

There is much more to Clara’s career. Please visit her site for more: HERE:

Monica’s career as a violinist and champion of new music is extensive. She founded and directed the Manhattan chamber music series “Concerts in the Heights”. This series brings together world-class musicians for performances and educational projects.  She is also a founder and Artistic Director of the conductor-less String Orchestra of New York City- SONYC.

She has toured extensively across Europe with classical and contemporary chamber music repertoire and has participated in such festivals as Great Irish Houses Music Festival in Ireland, and the Schleswig-Holstein Chamber Music Series in Germany.  She is presently coaching and performing at Concordia College.  Chamber music collaborations have included Colin Carr, Antony Pay, and Philippe Entremont as well as crossover work with Trey Anastasio from Phish and country singer Trisha Yearwood.  She has performed as soloist with orchestras in Scandinavia, Central Europe, and the New York region and has recorded under the Philips and Albany labels.

Please visit her site for more about Monica and SONYC. HERE:

Internationally acclaimed violinist GREGORY FULKERSON has had a flourishing career in both classical and contemporary music. It was as a major exponent of American contemporary music that Mr. Fulkerson rose to prominence, taking the First Prize in the International American Music Competition sponsored by the Rockefeller Foundation and the Kennedy Center (now sponsored by Carnegie Hall). As a result of that victory, Mr. Fulkerson began a very active performing career which included debuts in New York, London, Paris, Rome, and Brussels. He has performed over 30 concerti with orchesrtra, including the World Premieres of the John Becker Concerto with the Chattanooga Symphony, the Richard Wernick Concerto with the Philadelphia Orchestra, and the Roy Harris Concerto with the North Carolina Symphony (later performing and recording it with The Louisville Orchestra). Among the conductors under whose baton Mr. Fulkerson has played are Riccardo Muti, Zdenek Macal, Geoffrey Simon, Bernard Rubenstein, Lawrence Leighton Smith, Gerhardt Zimmermann, Robert Spano, and Marin Alsop. He performed the title role in the 1992 revival of the Philip Glass opera, EINSTEIN ON THE BEACH, for a total of 48 performances on four continents, and later recorded the work for Nonesuch.
MORE HERE: and HERE: 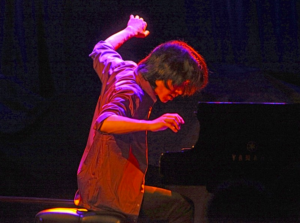 CHIRON core member Robert Dick is world renowned for his revolutionary work as a flutist, composer, inventor and world leader in new music techniques.  Every ‘woke’ composer on earth knows his compendium, The Other Flute.  I have the distinct honor of seeing the manuscript, a work to live surely beyond our lifetimes.

Universally recognized as the leader in contemporary music for flute, Robert Dick embodies the ideal of the Renaissance artist. With equally deep roots in classical music old and new and in free improvisation and new jazz, he has established himself as an artist who has not only mastered, but redefined the instrument.

Robert Dick believes in unlimited potential for growth. Personal growth, artistic growth, growth and change for our instrument. He intends to keep learning and improving for all of his life and does not feel that there will be a moment to say “I’ve arrived, its time to rest”. And he will keep doing what he loves — creating and sharing through performance and teaching. Visit Robert HERE: 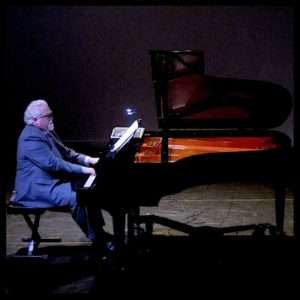 Daniel is co-director of CHIRON Performing Arts. He is a highly regarded pianist, a performer of new music as well as a scholar on the music of Schubert. He is professor of Music at SW Minnesota State University and has conducted the SW Minnestoa Orchestra for many years. He has championed the music of many composers in the Minnesota region and beyond. He performs piano recitals and concertos with orchestras. Visit his website for much more: HERE:

The Music of Eugene O’Brien

“O’Brien vividly evokes the drama of the poetry… the music gathers momentum, supporting the composer’s view that the songs in Algebra of Night need to be sung together as a cycle, not individually as part of a hodge-podge recital. Sunday’s full-length performance, led by Kevin Murphy, was riveting… and resulted in a vociferous standing ovation.”
“The Clouds of Magellan is celestial, suggestive of universal distances, and consummately orchestrated. —Peter Jacobi, The Bloomington Herald Times
Most alluring was Embarking for Cythera by Eugene O’Brien. With its sunbaked, evanescent imagery, Mr. O’Brien’s score is punctuated by glittering stabs of color. The final episode dissolves to a shimmering tonic major that, like the island of the title, never quite congeals.” —Joseph Horowitz, The New York Times

“Among the best concerts of their kind in my experience.” – Karel Husa, Pulitzer Prize Winner

“There are few musicians that are truly revolutionary. Robert Dick is one of them.”  — Bill Shoemaker, JazzTimes

Dick has classical technique up the wazoo, yet he over-blows and vocalizes with the swagger of James Brown and the daring passion of Jimi Hendrix.   —  www.jazzreview.com

It would be easy to argue that Robert Dick is the most important living 20th century flutist. — Downtown Music Gallery

Osowski also has tremendous vocal skill… her rich and radiant voice was deeply satisfying to listen to. –  Urban Milwaukee

“There is a natural bloom to her voice that is irresistible, and her nuanced control of soft dynamics will be a lingering memory…” – Greg Hettmansberger

“SONYC is a rarity among instrumental ensembles of its size, its members possess the vision and talent to communicate with great authority the full breadth and emotional power of the string repertoire.” Robert Spano

“SONYC is a composer’s dream come true. Their amazing virtuosity, comprehensive artistic intelligence and passionate spirit combine to make brilliant music on every level. SONYC is an avatar of all that is right and true in our musical universe.” Paul Moravec, Winner of the
2004 Pulitzer Prize in Music

“Taka Kigawa has been highly acclaimed for his performances, especially in modern music repertoires for about last decade…” — SHINTARO KOBAYASHI, Mostly Classic (Japan)

“Taka Kigawa approached these elegant, playful pieces with his customary clarity and calm. Mr. Kigawa is always a poised guide through the most daunting music… His touch is cool, yet rounded and smooth, and, even at its steeliest, his tone is never rough or harsh…” — Zachary Woolfe, The New York Times

“Kigawa is known for drawing crowds with his unique style, which combines influences ranging from baroque to the most experimental elements of contemporary classical music…” — Paul Adler, Westchester Magazine

“Mr. Kigawa said that his take on “Catalogue” is longer than others because he tries to take “a lot of space and silence.” These chords were one such instance: Already majestic, they became almost holy in his hands…” — Joshua Barone, The New York Times