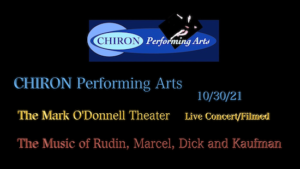 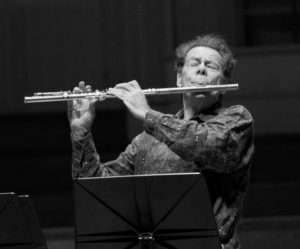 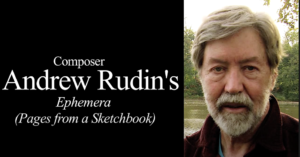 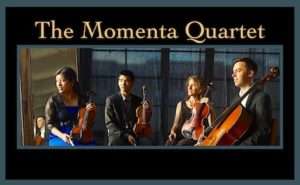 CHIRON core member Robert Dick is world renowned for his revolutionary work as a flutist, composer, inventor and world leader in new music techniques.  Every ‘woke’ composer on earth knows his compendium, The Other Flute.  I have the distinct honor of seeing the manuscript, a work to live surely beyond our lifetimes.

Universally recognized as the leader in contemporary music for flute, Robert Dick embodies the ideal of the Renaissance artist. With equally deep roots in classical music old and new and in free improvisation and new jazz, he has established himself as an artist who has not only mastered, but redefined the instrument.

Robert Dick believes in unlimited potential for growth. Personal growth, artistic growth, growth and change for our instrument. He intends to keep learning and improving for all of his life and does not feel that there will be a moment to say “I’ve arrived, its time to rest”. And he will keep doing what he loves — creating and sharing through performance and teaching. Visit RobertHERE: 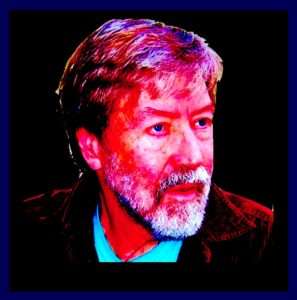 ANDREW RUDIN [roo-DEEN] (b. 1939) is a Texas-born composer of Swedish ancestry whose many contributions to the literature of electronic music brought him early recognition. His Il Giuoco was the first large-scale work for Moog Synthesizer, a U.S. representative in the 5th Paris Biennale. His synthesized music is heard in the sound-track of the film Fellini: Satyricon and his Tragoedia was the second of Nonesuch Records’ electronic music commissions.

His interest in theatrical music has resulted in ballets for the Pennsylvania Ballet, Murray Louis, Dance Theatre Workshop, Louis Falco, Jeff Duncan, London Contemporary Dance Theatre, and four collaborations with Alwin Nikolais, as well as incidental music for Tennessee Williams’ Outcry and numerous scores for PBS Television. In 1972, his opera The Innocent was produced in Philadelphia by Tito Capobianco. His orchestral and chamber music has been performed throughout the United States by such artists as pianists Lydia Artymiw, Beth Levin, Steve Beck and Marcantonio Barone, violinists Diane Monroe and Miranda Cuckson, violist Brett Deubner, cellists Sam Magill and Eugene Moye, percussionist Anthony Orlando, of the Philadelphia Orchestra, flutists Mimi Stillman and Patricia Spencer, and clarinetist Ronald Reuben. Recent concertos for Violin, Viola, and Piano have brought him renewed recognition.

He is the recipient of fellowships from Yaddo, The MacDowell Colony, Ucross Foundation, Virginia Center for the Creative Arts and The Pennsylvania Council on the Arts, among his many grants and awards. His teachers have included George Rochberg, Karlheinz Stockhausen, Ralph Shapey, Kent Kennan, and Paul Pisk.

He has taught on the faculties of the Juilliard School and The Philadelphia College of the Performing Arts, where he was founding director of the Electronic Music Center. He is retired from the faculty of The University of the Arts (Philadelphia), where he taught from 1964 to 2001. His music may be heard on the Centaur, Innova, and ERM labels, and is published by Associated Music Publishers as well as Skåne Hill Music. The composer’s professional affiliation is BMI.

Linda is a board member of the International Composers and Interactive Artists (iCIA) Inc and CEO of International Arts Educators Forum,(IAEF) Inc.

She was awarded the National Institute for Staff and Organizational Development – Excellence in Teaching Award, and was chosen for the 2006 MCFP Princeton University Fellowship Program.

As director of CHIRON Performing Arts, Christopher Kaufman has presented the work of hundreds of artists of all disciplines. He is a composer of a wide variety of works, such as music for the classical concert stage and film, and environmental works which feature hundreds of natural sounds mixed with live players and original videos.

He also creates multimedia works for audiences of all ages which he presents on his series, The Phantastic Theater.
See his biographical brochure: HERE:

Momenta: the plural of momentum – four individuals in motion towards a common goal. This is the idea behind the Momenta Quartet, whose eclectic vision encompasses contemporary music of all aesthetic backgrounds alongside great music from the recent and distant past. The New York City-based quartet has premiered over 150 works, collaborated with over 200 living composers.

Word of Momenta’s passionate advocacy for emerging composers spread quickly. Composers started inviting Momenta for similar concerts and residencies at other academic institutions, among them Harvard, Brown, Cornell and Columbia Universities; the Boston and Cincinnati Conservatories; and the Eastman School of Music. Momenta has received two Koussevitzky Foundation commission grants; a Barlow Foundation commission for Claude Baker in 2016; a Jerome Foundation grant to commission Eric Nathan in 2013, and a Chamber Music America commission for Alvin Singleton, whose new work will be featured prominently in our 2018-19 season. Deeply committed to the musical avant-garde of the developing world, Momenta has premiered and championed the works of Tony Prabowo (Indonesia), Cergio Prudencio (Bolivia) and Hana Ajiashvili (Georgia). Upcoming adventures include a project to perform and record all thirteen string quartets by Mexican microtonal maverick Julián Carrillo (1875-1965) over the next three years.

Mr. Barone performs as a member of the Lenape Chamber Ensemble, 1807 and Friends, and the Craftsbury Chamber Players.

He has taught piano at the Bryn Mawr Conservatory of Music, of which he is Assistant Director, since 1980; and he is an Associate in Performance at Swarthmore College.

He studied with Eleanor Sokoloff at the Curtis Institute of Music and with Leon Fleisher at the Peabody Conservatory of Music.  Among his other teachers were Susan Starr and Leonard Shure.

Alan R. Kay is Principal Clarinetist and a former Artistic Director of Orpheus Chamber Orchestra and serves as Principal Clarinet with New York’s Riverside Symphony and Little Orchestra Society.  Mr. Kay’s honors include the Classical Recording Foundation Samuel Sanders Award, the C.D. Jackson Award at Tanglewood, a Presidential Scholars Teacher Award, and the 1989 Young Concert Artists Award with the sextet Hexagon featured in the prizewinning film, “Debut.”  A founding member of the Windscape Quintet, he is a regular guest in chamber music venues throughout the world, including the Yellow Barn, Orlando (Holland), Bowdoin, and Bach Dancing and Dynamite Society Festivals, and the Cape May Music Festival, where he curated a concert series for 25 years.  Mr. Kay taught at the Summer Music Academy in Leipzig, Germany in 2004 and teaches at the Manhattan School of Music, The Juilliard School and Stony Brook University, where he also serves as Executive Director of the Stony Brook University Orchestra.  A virtuoso of wind repertoire, Mr. Kay has recorded with Hexagon, Windscape and the Sylvan Winds. His transcriptions for wind quintet are available from Trevco Music Publishing and International Opus.  Mr. Kay’s recent CD, “Max Reger: Music for Clarinet and Piano,” on Bridge Records with pianist Jon Klibonoff, won the Classical Recording Foundation’s Samuel Sanders Chamber Music Award. He has also recently recorded Perry Goldstein’s Quintet with the “M” Prize-winning Calidore String Quartet and reductions for chamber ensemble of Mahler’s Kindertotenlieder and Das Lied von der Erde, and Max Reger’s Romantic Suite in The Netherlands with Gruppo Montebello, Henk Guittart conducting. He has served on the juries of international chamber music competitions in Trapani, Italy and Rolduc, Holland, Young Concert Artists International Auditions, Concert Artist Guild Auditions, and the Fischoff Chamber Music Competition.

Over the span of his career, Gregor Kitzis has demonstrated tremendous range.

> He has played everything from solo and chamber music recitals and Broadway Shows to rock, ragtime, Klezmer, Indian and Tango.

> He has performed on venues such as Saturday Night Live, Live From Lincoln Center, the David Letterman, Conan O’Brien, Rosie O’Donnel and Jay Leno Shows, as well as new music and jazz festivals throughout the U.S., Canada and Europe.

> He has performed and recorded with orchestras such as The Orchestra of St. Lukes, Blanche Moyse’s New England Bach Festival, Concordia, Long Island Philharmonic and Bang On A Can’s Spit Orchestra.

> He has performed with new music groups such as Modern Works, Ensemble 21, North/South Consonance, Essential Music, Common Sense, The Group For Contemporary Music, and the Crosstown, Xenakis and S.E.M., and has performed with bands including Songs From a Random House, Gawk, Church of Betty and Voltaire.

He is a founding member and first violinist of The Ouluska Pass Chamber Music Festival in Saranac Lake, N.Y.

“Among the best concerts of their kind in my experience.” – Karel Husa, Pulitzer Prize Winner

“There are few musicians that are truly revolutionary. Robert Dick is one of them.”  — Bill Shoemaker, JazzTimes

Dick has classical technique up the wazoo, yet he over-blows and vocalizes with the swagger of James Brown and the daring passion of Jimi Hendrix.   —  www.jazzreview.com

It would be easy to argue that Robert Dick is the most important living 20th century flutist. — Downtown Music Gallery

“Chris Kaufman’s THE MUSICAL FOREST builds on the tradition of Stravinsky’s L’histoire du Soldat and Prokofiev’s Peter and the Wolf, creating a unique performance work that entertains and educates in an original work of art.” – Joe Carrol, Emmy Award Winning Composer who worked with Jim Henson for over 25 years on projects such as Sesame Street.

“Andrew Rudin has been an important presence in the local contemporary music scene for the past four decades.”  – Michel Caruso

“The best large-scale electronic work I have ever heard. In Andrew Rudin’s hands the electronic idiom finally comes of age.” – Alred Frankenstein

(of his Piano Concerto) “Extroverted, engaging and driven by an almost heroic sense of drama, Rudin has a gift for the kind of gesture that grabs you by the ears and won’t let go.” Washington Post

(of his Viola Concerto) “The concerto is an important addition to the none-too-large repertoire for this instrument.” – Fanfare Magazine

About the Momenta Quartet

“[They] unleashed a veritable firestorm of intensity… Momenta inhabited every note in an impassioned reading that combined brilliant virtuosity with the utmost sympathy and unity of intent.” – Patrick Rucker, The Washington Post.

“The [Momenta] Quartet has critics and audiences alike buzzing about its range and exuberance.” – C.W. Lee, New York Times.