Nocturne
– from Kaufman’s Hudson Valley Music
THE CHIRON FESTIVAL OF THE ARTS AND ENVIRONMENT of 12/10/17 has occurred!
The progression of the event is expressed below. 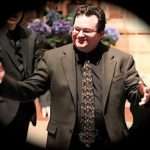 The concept for this event was to begin with Dr. Christopher Kaufman’s ‘The Phantastic Theater’ – art and music for family audiences and progress through to advanced works, and include a mix of performances of new music works and traditional classical music pieces all performed by world-class artists.  The issue of Environmentalism, both in celebration of nature and activism pervades the event. A speaker from the National Youth Council of Jane Goodall’s Roots and Shoots Organization addressed the audience.

The event began with a performance of Dr. Kaufman’s, THE MUSICAL

In the side bar you may view a video of the opening sequence in this work. In April 2018, Christopher and Sofia will be performing the version for full orchestra with the Southwest Minnesota Symphony, Daniel Rieppel – conductor.

delivered an impressive performance of Mikhail Glinka’s, THE LARK.

Then it was time for Opera Star Jennifer Roderer to take the stage.  Jennifer performs all over the country, including the Metropolitan Opera, (link to her bio here: Jennifer).  She told how she loved the fun witch characters in opera

when she was young, and that helped inspire her to become a singer, and the realization that she had an amazing voice!  Jennifer  thrilled the audience with a performance of the Witch’s Scene from Humperdink’s Hansel and Gretel, complete with the evil dance and running into the audience!

She was joined by concert pianist Daniel Rieppel!  Daniel then performed Kaufman’s solo piano music and treated the audience to a brilliant performance of Claude Debussy’s Feux d’artifice.  He then rejoined Jennifer and the duo performed Kaufman’s setting of E. E. Cummings, The Sky was Luminous, and then Clara Schumann’s moving, Die Lorelei.

We are an Arts Organization!  Help us pay our Artists!  DONATE

You can hear Daniel’s performance of Feux d’artifice in the side bar music player!

Later in the program they returned and performed the Invocation Aria from Giuseppi Verdi’s Un Ballo in Maschera.  There is a video clip of this performance in the side bar.

The first part of the festival featured Arunima Roy, a representative of Jane Goodall’s Root and Shoot’s national youth council!  She spoke about Jane Goodall and Environmental protection.  More about Arunima HERE.

The CHIRON Festival continued with world renowned flutist/composer/inventor Robert Dick performing on his human-sized contrabass flute.  He performed to a film created by Kaufman of images of Earth from space.  They call the work, Blue-Green Planet and you can see/hear this work by viewing the video in the side bar.

Jeffrey Weeks Harrison, fresh from his adventures in Africa,

performed his cinematographic work, ‘A Day in the Life of an Elephant: The Mourning Scene’. Kaufman created a film to express this story as Jeffrey performed on his French Horn to a backtrack of his own creation.

creativity and activation.  Joe is the founder of the Manhattan Producer’s Alliance and worked with Jim Henson for many years.  He asked questions of the audience and evoked discussion, providing a meaningful break in the arts performances before the last work.

The CHIRON FESTIVAL for the ARTS and ENVIRONMENT ended with a performance of Dr. Kaufman’s HUDSON VALLEY MUSIC. HVM is for live performance, video comprised of both natural images and the work of environmental artist Ken Cro Ken and includes extensive ‘music concrete’ compositions created from hundreds of natural sounds.   These compositions act as backdrop to the lead performers.  HVM takes the audience on a journey

from the Long Island Sound, up the Hudson Valley and into mythological space.  Kaufman redesigns this work for any instrumentation, it has been performed as a work for solists such as flute and tuba and many various chamber ensembles all the way to full orchestra.  Kaufman created an original version for the performers of this evening, i.e. piano, horn, flutes and featuring Jennifer Roderer performing readings from the works of John Muir,

Hermann Melville, Walt Whitman, Ralph Waldo Emerson, Henry Wadsworth Longfellow and William Blake.  There are clips of this performance in the side bar!

The audience was thrilled with the event and you can read some of their comments in the side bar.  The troupe will return next year, in early November for another CHIRON FESTIVAL.  More information on this soon to come.

Jeffrey Week Harrison: Mourning Scene from A Day in the LIfe of an Elephant

CHIRON must take this all over the world! It is so positive about our planet and about being a human being… CHIRON shows how amazing we can be with all that talent on stage!  You are doing it!  Making a difference using your skills, family, music, art and more… lots   of positive powerful talent!   – Alice Cotton – Teaching Artist

After concert audience members:
“Wow! What a fascinating program!”

“Thank you so much for having me. I really enjoyed the performances. I was so impressed with Sofia Rose’s performance. I don’t know how she remembered it all!